LATEST NEWS: Local newspaper follows up on the success of the project. Click here to read.

"There is likely no harsher condition in the US to prove their performance. To my knowledge this site was the first use of this product in the Great Lakes system. I am confident that as we add more sites they will become the standard." William Doan, Michigan Division of Natural Resources 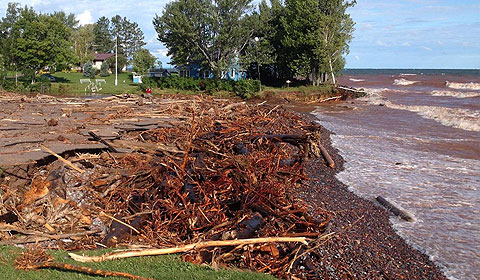 Before and After a storm with 15' waves 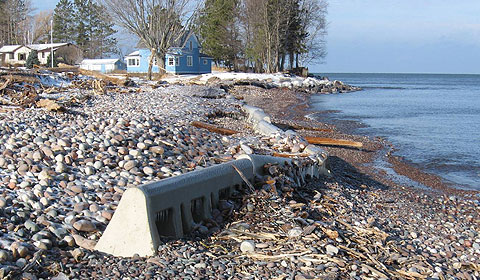 Michigan Department of Natural Resources employees were busy installing new barriers along a section of the Lake Superior shoreline at Little Girl’s Point Thursday in an effort to combat erosion near the mouth of Oman’s Creek.

The installation of the Beach Prisms - 4-by-10-foot concrete blocks with specially designed holes to allow the movement of water through them - is the first use of the technology in Michigan, according to Bill Doan, district supervisor with the DNR. The technology has traditionally been limited to the Atlantic coast, Doan said. Doan explained the allowance of water to flow through the structures was a marked difference from the seawalls or rip-rap that is normally installed to combat coastal erosion. The slots in each block are built with a specific parabolic curve to allow water to flow through the blocks without taking shore sediment with it, according to Regional Sales Manager John R. McKenna, with Smith-Midland, the company that manufactures the Beach Prisms.

“Beach Prisms are designed to dissipate wave energy and stop erosion,” McKenna said, explaining the disruption of energy is what prevents the waves from taking sediment off the shoreline. In fact, the design actually allows sediment to be carried onto shore, there by restoring shoreline damaged by erosion.

The DNR has undertaken eight studies of the section of lakeshore and has been unable to come up with a viable solution to the erosion problem until the decision to install Beach Prisms, Doan said, expressing confidence the new technology would solve the problem. “I’m pretty confident they are going to do what we think they are going to do,” Doan said, adding that the technology could simply be taken elsewhere if it fails to stop the eroding at the Point. The design traces its roots back to World War II England, McKenna said, when design ers studied England’s coastal defenses and noticed sand built up in certain areas of the defense works.

This led to the development of a prototype for technology that could be used to prevent erosion, McKenna explained, with the Beach Prisms installed Thursday being the fifth generation of the wartime designs. The parabolic curves in the design is key, McKenna said, as they allow for the natural ebb and flow of water on calm days and only break the energy of waves during windy periods, alleviating the concerns of any environmental impact beyond the prevention and countering of erosion.